On the 23rd of June 2020, European Automobile Manufacturers Association (ACEA) issued an article on their website titled “EU car sales forecast 2020: Record drop of 25% expected this year, says ACEA”. According to the article 13.8 million Europeans work in the auto industry (directly and indirectly), accounting for 6.1% of all EU jobs. 11.4% of EU manufacturing jobs – some 3.5 million – are in the automotive sector. Motor vehicles account for €440.4 billion in taxes in key European markets. The automobile industry generates a trade surplus of €84.4 billion for the EU. The turnover generated by the auto industry represents over 7% of EU GDP. Investing €57.4 billion in R&D annually, the automotive sector is Europe’s largest private contributor to innovation, accounting for 28% of total EU spending.

In June 2020, International Energy Agency (IEA) prepared Global EV Outlook 2020. At the end of 2019 there were 0,97 million of BEVs and 0.78 million plug-in hybrid electric vehicles (PHEVs) in Europe. According to the ACEA there are some 308.3 million motor vehicles in circulation on the European roads. 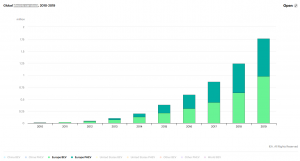 A policy support study carried out in 2016 as a part of the EAFO project for the European Commission Directorate General Mobility & Transport, predicts that achieving a 100% zero emission vehicle (ZEV) fleet by 2050 will require all new car sales to be ZEV by 2035.

The data above show that even with increasing sales in BEV the target will not be easily reached.

Cost of the BEV vehicles largely depend on the battery cost. The majority of customers are accustomed to the range from 900 km to more then 1000 km per 1 tank of fossil fuel. In comparison to premium BEVs that achieve 400 km per charging in ideal conditions and moderate speed, conventional internal combustion cars are more affordable and have a larger basin of used vehicles to choose from.

In the second half of 2020 and in 2021 new attractive passenger BEV and hybrid car models are coming to the market. However, waiting times for new BEVs in some of the EU countries can amount to 6 or more months and the numbers of cars per market are limited.

The answer is simple: “innovation” – reducing price of batteries and extend the energy density of the battery for the longer range with one charge. However, the execution of the solution is difficult. Main reason why batteries are expensive are raw materials cobalt and nickel.

In June, the 30st, CNBC published an article “Tesla and the science behind the next-generation, lower-cost, ‘million-mile’ electric-car battery”, by Tim Mullaney. Tim interviewed several experts in automotive industry, research and innovation, economy experts and other experts, in the segment of BEVs.

James Frith, head of energy storage at Bloomberg New Energy Finance in London said that “today’s batteries cost about $147/kWh, down from about $1,000 in 2010 and $381 in 2015”. This is about 128 €/kWh, down from about 872 €/kWh in 2010 and about 332 €/kWh in 2015. Shirley Meng, a materials scientist and professor at the University of California San Diego who directs the school’s Sustainable Power and Energy Center said that “it is going to be hard to get below $100 per kilowatt”. That is about 87 € per kilowatt and the aim is to get the price down to about 50 € per kilowatt, according to Wedbush Securities analyst Dan Ives. In the last decade price of the battery has reduced up to 80%. Additional price reductions are being promised based on the reduction of the cobalt’s and nickel’s share in the battery production. New materials are being tested to substitute cobalt and nickel. Lithium-iron phosphate batteries are promising to get the price down. This technology is being developed for years and it may still take some years before it’s going to be available in passenger cars on the market.

Slovenian Institute for chemistry gained in 2017 two contracts with Honda to research the potential of magnesium batteries. All the research results are owned by Honda. Now the Institute is researching the potential of lithium-sulfur batteries. Stated by the Institute, “the lithium-sulfur batteries provide 3 to 5 times the theoretical energy density compared to lithium-ion batteries. However, until their commercial use, many unresolved issues still need to be resolved.” 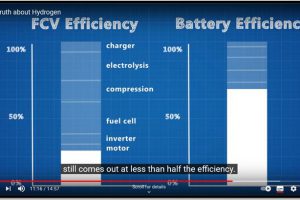 International event for the introduction of electric mobility